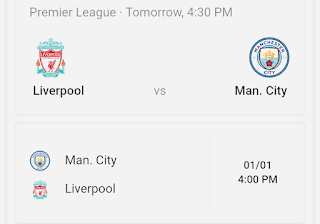 To all our viewer don’t miss this chance
Win 10,000naira for free by predicting tomorrow premier league
Between Liverpool vs Manchester city
Time 4:00pm
Who do you think we win the game tomorrow
;predict and win :

Liverpool: Naby Keita could be fit. Lallana and Alex Oxlade-Chamberlain are out.

Man City: De Bruyne and Mendy returned to training. Gundogan faces a fitness test on an injured hamstring. Bravo, Delph and Mangala are out.

Also read this Pep: “At the end, it’s the teams and the clubs that win the game. I don’t play against the manager, we play against Liverpool. He is an excellent manager, I have a lot of respect for the way he plays, his proactive teams

This is how to predict

You full name
Phone no
Goals to come
First half win

Predict and win as we call tomorrow super Sunday