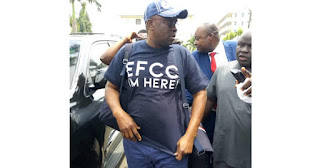 The immediate past Governor of Ekiti State ,
Ayodele Fayose , has arrived at the Abuja office
of the Economic and Financial Crimes
Commission .
Fayose entered into the EFCC office in Wuse 2
in the company of Rivers State Governor ,
Nyesom Wike , and a former Minister of
Aviation , Femi Fani – Kayode .

The immediate past Governor of Ekiti State fayose , who wore a customised T – shirt

emblazoned with “ EFCC I’ m Here” over a pair
of jeans and a face cap , went into the
Commission with a bag pack.
Addressing journalists at the Commission ,
Fayose alleged that the EFCC deployed its men
in his home, even when he had shown
willingness to honour the Commission ’ s
invitation .
Also speaking , Wike and Chief Mike Ozekhome
( SAN) , asked the Commission not to abuse the
former governor ’ s rights .
Fani – Kayode , who also spoke with EFCC
detectives, joked that he was a regular
customer of the Commission and asked them
not to maltreat Fayose .