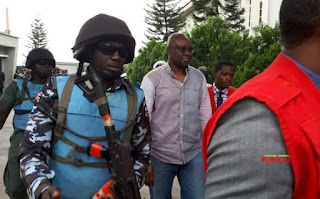 The former Governor of Ekiti , State ,
Ayodele Fayose , on Monday , appeared before a
Federal High Court in Lagos , where he pleaded
not guilty to the allegation that he
misappropriated N30 . 8 billion .
The embattled former governor was charged to
court by the Economic and Financial Crimes
Commission . A large number of his supporters
were present in court , the News Agency of
Nigeria reports .

He pleaded not guilty to the 11 charges .
EFCC is prosecuting Fayose alongside his
company — Spotless Investment Ltd — on 11
charges of N30 . 8 billion fraud .
After the arraignment of the accused, the
defence counsel , Mr Kanu Agabi ( SAN) , who is
a former Attorney General of the Federation ,
informed the court of a motion on notice for
the bail of the accused.
He told the court that same had been served on
the prosecution.
In response , the EFCC Prosecutor , Mr Rotimi
Oyedepo , confirmed service of the bail
application but told the court that he required

time to reply .
Justice Mojisola Olatoregun, consequently ,
adjourned the case until October 24 for the
hearing of the bail application.
Meanwhile , following a plea by defence counsel
on the temporary remand of Fayose , the court.

ordered that he be remanded in custody of the
EFCC pending bail .