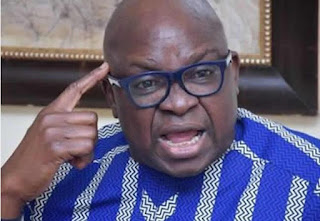 The outgoing Governor of Ekiti State, Ayodele Fayose, has threatened to leave the Peoples Democratic Party after the National Convention held on Saturday in Port-Harcourt, Rivers State.
The governor hinted our correspondent on Monday that he would renounce his “membership of the PDP anytime from now.”
He added, “After consultations, I will speak clearly to Nigerians.”
A former Vice-President, Atiku Abubakar, was declared the winner of the party’s presidential primary, defeating the Sokoto State Governor, Aminu Tambuwal, and Senate President Bukola Saraki, to a second and third positions.
Details shortly